The Stourport Ring provides a popular one week holiday combining canal and river cruising through the very heart of England. Head south from Brewood and follow the Birmingham Canal Navigations (BCN) main line from Aldersley junction towards the rejuvenated Gas Street Basin with its easy access to the museums, concert halls, bars, shops and restaurants of this now vibrant area of Birmingham.

A few hours south of Gas Street, the Worcester and Birmingham Canal sheds its urban identity and the glorious Worcestershire countryside awaits. 36 locks in the four miles around Tardebigge raise the canal some 250 feet, but your exertions are handsomely rewarded with panoramic views of the Malvern Hills.

Onwards to the cathedral city of Worcester and the three hour voyage along the River Severn to Stourport Basin, one of the scenic highlights of the trip. With a network of basins, canal wharves and warehouses, Stourport is perhaps the best preserved example of an inland port and evokes an earlier era of bustling, commercial activity. Few canals are as picturesque as the Staffs and Worcester; the locks come at long intervals and are not too demanding on the muscles. Opened in 1772, the canal pursues a winding course through wooded and rural countryside with fine sandstone cuttings and attractive features such as Kinver village and Bratch locks. 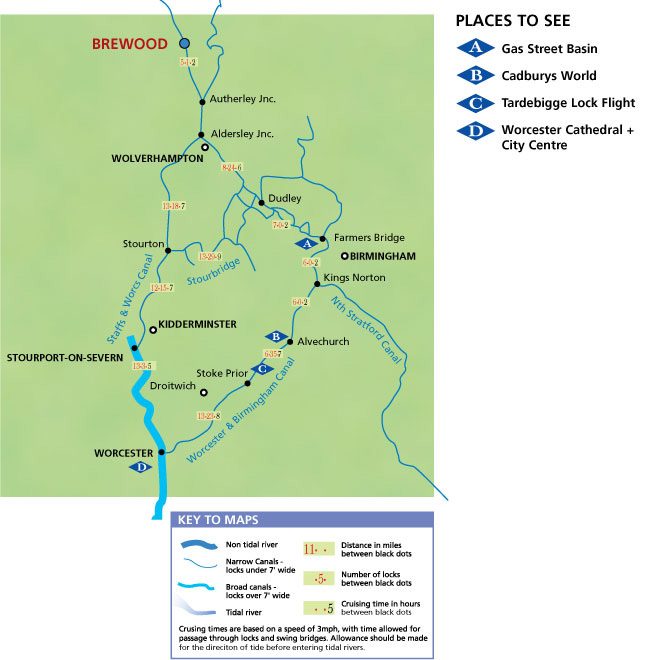 Just come back from a 4-night cruise on lovely Sir Belin. Countrywide Cruisers were A1. So friendly, helpful and accommodating- and great value!”