A gentle and memorable relaxing week long cruise exploring almost the entire length of the Shropshire Union as it sweeps majestically north-westwards towards the medieval city of Chester. Built late in the canal age, Thomas Telford’s masterpiece reflects the sophistication of engineering at the time and, in contrast to the older contour canals, deep cuttings and high embankments allow the “Shroppie” to follow a relatively direct course.

Three miles north of Brewood, the lock at Wheaton Aston is the sole barrier in a 20 mile stretch which culminates at the strikingly beautiful lock flight at Tyrley, where the canal descends into a tranquil, sandstone cutting roofed with intertwining branches. A further 17 locks in the next 7 mile stretch to Audlem make the convivial Shroppie Fly Tavern a welcoming source of refreshment and an ideal second night mooring site.

Eight miles beyond Audlem, the fine old town of Nantwich heralds a perceptible change in the character of the canal as it begins to sweep broadly across the prime dairy pastures of the Cheshire plain. From Barbridge onwards, wide beam locks allow boats to double-up, speeding progress towards the dramatic first glimpses of Beeston Castle, perched high on its isolated outcrop. The ruins of this 13th Century fortress are well worth a short detour on foot from bridge 108, to take in the remarkable panoramic views. 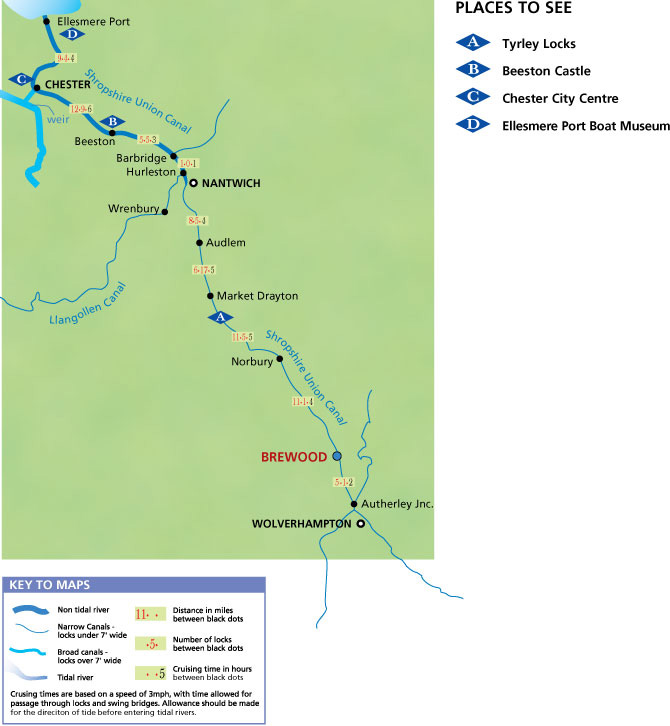 The next 11 miles carry the Shropshire Union deep into the heart of Chester; just beyond Cow Lane Bridge the formidable King Charles’ Tower looms menacingly above the impressive, and virtually intact, medieval city wall. Spend several hours here exploring this wonderful city with its unique double-tier shopping streets and abundance of ancient and fascinating buildings – the perfect opportunity to replenish your supplies for the homeward journey to Brewood.

We were met by a chap who was really helpful, really friendly – started the week off well with his cheery manner”